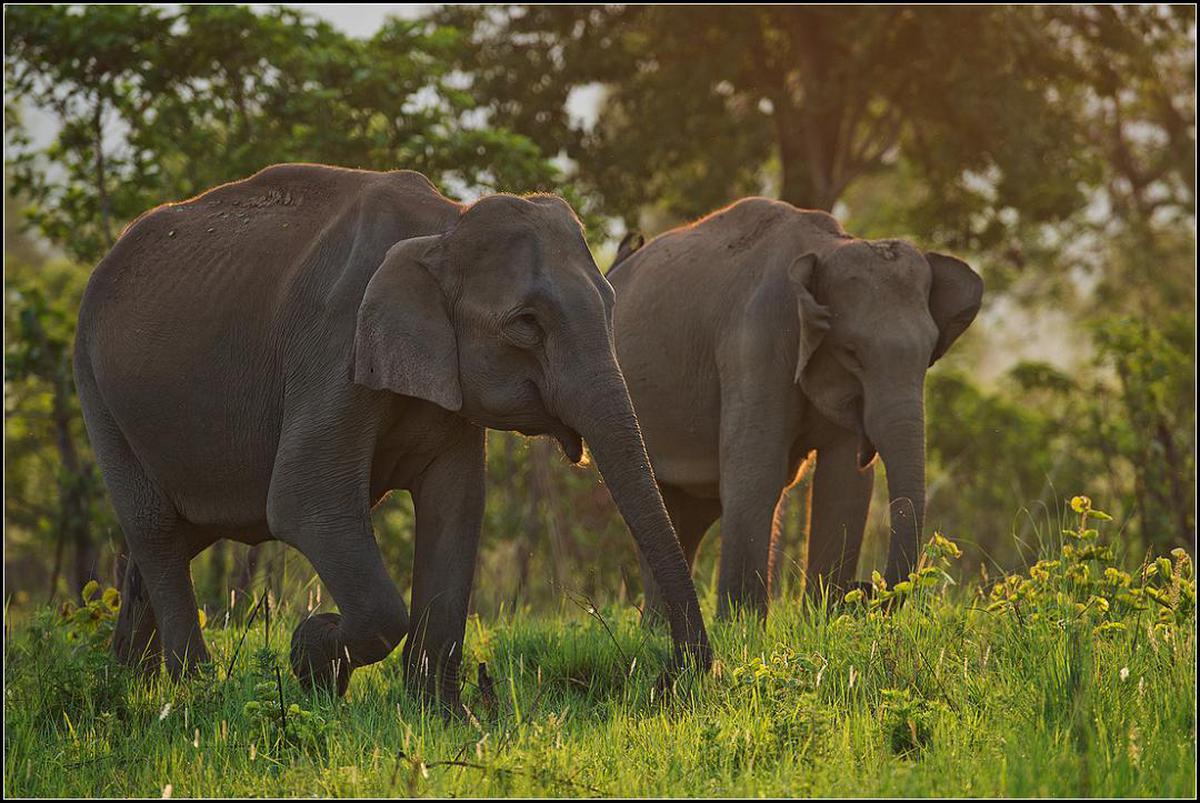 While searching for the majestic and highly photogenic Asian elephant in the jungles of Corbett, I uncovered the numerous wonders that make this national park—one of the oldest in our country—such a valued source of wildlife and natural history. Just before I reached the Khinanauli guest house with my A99, I saw some elephants near the roadside bushes. There wasn’t a chance to take too many pictures, but my hopes began to rise. As we started our drive toward Dhikala, a tall, lean male with a broken tusk walked alongside our path. Towards the evening, some more made their appearance, and I began to feel more optimistic.

Early in the day, tiger movement and warning calls were reported from Thandi Sarak. I proceeded towards Mota Sal to check for elephant activity there, but didn’t have much luck. On my return to the middle road, however, I was fortunate to encounter some elephants against the beautiful morning light. We continued towards Mota Sal, when the driver stopped our vehicle and said that the tiger was approaching. I eagerly grabbed my A99 with 500mm, when he interrupted to say that he was much closer, so I reached for the 70-200mm. Before I know it, the tiger peeps out of the green leaves of the sal foliage—a sureshot 500mm picture—I fire three bursts and attempt a horizontal. The tiger starts moving just at this moment, but at least, he’s given me a couple of good shots. 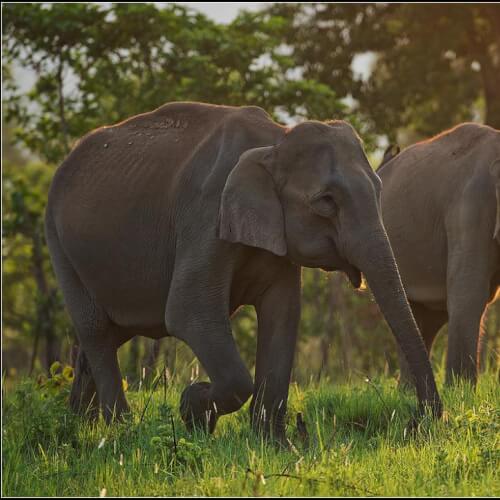 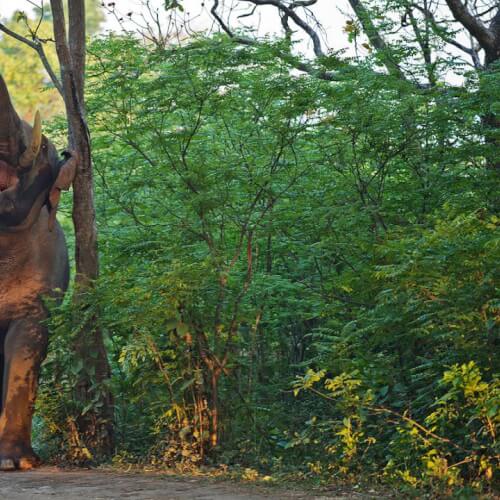 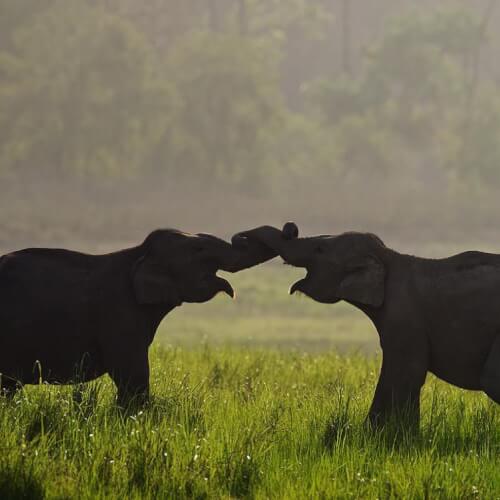 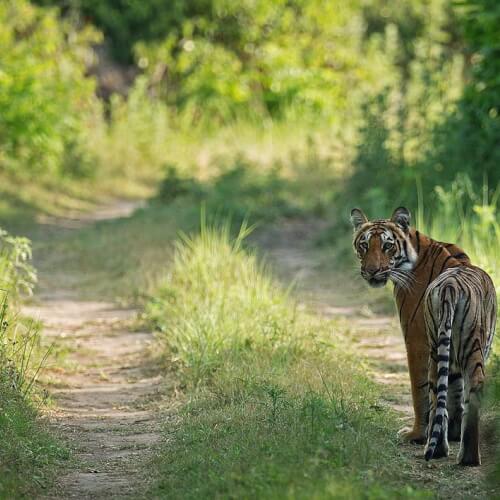 This time, we headed straight for Mota Sal. At first glance, I encountered a group of elephants on the banks of the river and another on the left side in the grasslands, moving slowly towards the river. A very cute calf that I happened to photograph before, was also present—a playful thing, who preferred to stay under the mother’s belly or beside her, always at a touching distance.

A young tusker, who appeared to be very friendly with the calf and trusted by the mother, accompanied the little one into the water. Once in the river, the two were great buddies, often getting completely drenched, with the young one trying—unsuccessfully—to clamber on the tusker. As soon as the mother signalled, however, the calf came running out of the river, splashing all the way. The trip back was heightened by the glimpse of a Rhesus macaque, drinking water from a rain-filled puddle and reflecting beautifully in the late evening sunlight. 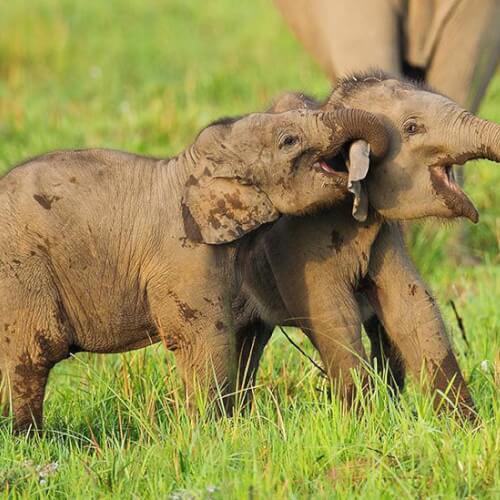 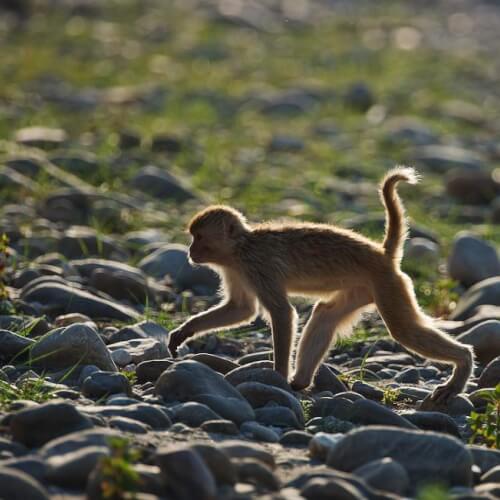 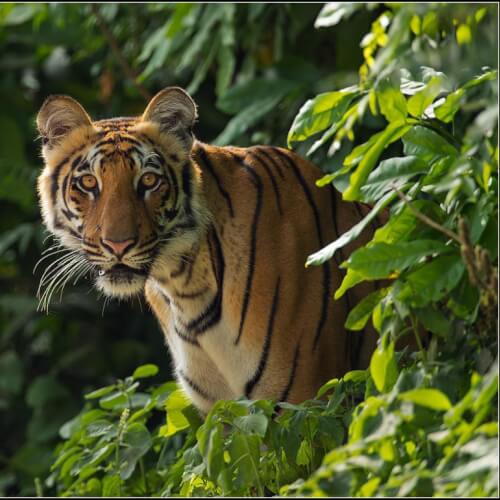 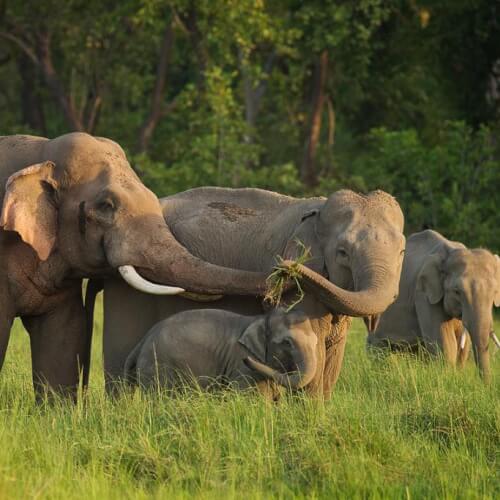 Very early in the morning, just before sunrise, I came upon a small herd of elephants outside Dhikala complex, surrounded by many calves. Within minutes, the light began to improve, and so did the position of the herd and the mood of the youngsters, who left the caring shadow of their mothers to come out and play in the open. Very often, I have seen that mothers with calves of similar ages become friends; this enables them to share their responsibilities and allows the calves to play and grow together. Fortunately, the grass was not too tall, giving me a clean view of their play in the glorious morning light.

Just then, a series of alarm calls by Chitals rang out—a tiger was on the move! All vehicles nearby start moving towards that direction, and my driver wanted to follow suit. I couldn’t bring myself to leave my wonderful subjects, however; their antics and camaraderie reminded me why I love photography so much. I stayed on to take some more heart-warming images with a smile on my face—watching them was like seeing life unfold before my eyes and my lenses. 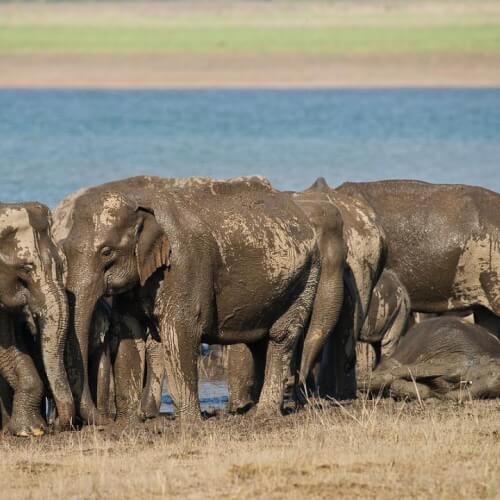 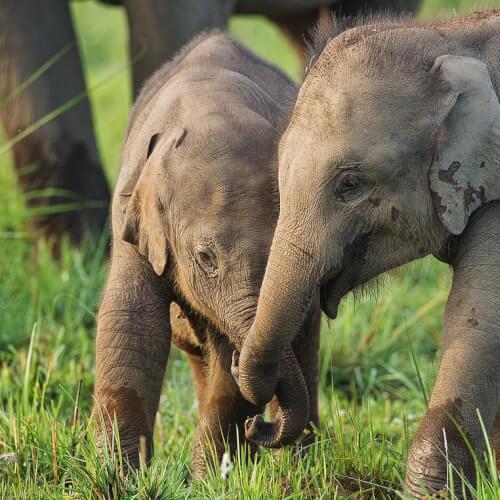 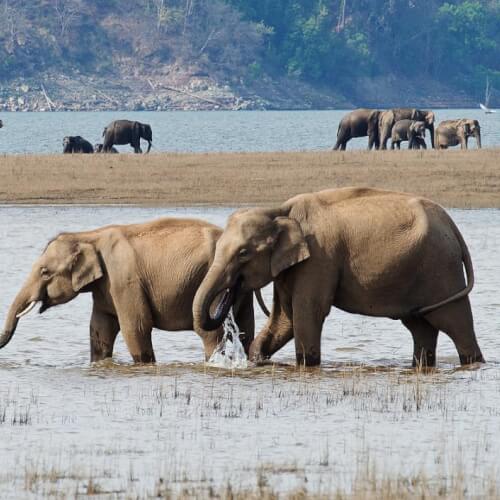 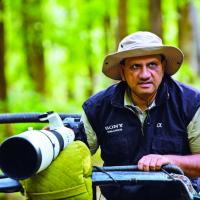